Events and Occasions - The Calendar
Previous Facts - Next Facts

Ten Facts about the Calendar 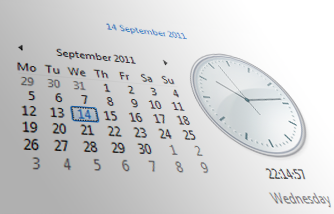 Ten Facts about the Calendar

Without the calendar, people everywhere would forget birthdays, anniversaries, miss appointments and never know what day it is. Thank goodness it exists! Here are ten facts about the calendar.

The calendar used in most countries now is the Gregorian Calendar and was proposed by the Catholic Church and introduced by Pope Gregory XIII in 1582 and adopted by several Catholic countries. Its predecessor was the Julian Calendar which had been introduced hundreds of years earlier by Julius Caesar.

The reason for the introduction of the Gregorian calendar was because the old Julian one "lost" days. This is because there were too many Leap Years using the Julian Calendar. Earth was thought to take roughly 365.25 days (365 days, 6 hours) to orbit the Sun, so an extra day was added every four years to compensate for the extra quarter of a day of an actual year. However, Earth actually takes just under 365 days and 6 hours to complete an orbit (365 days, 5 hours and 49 minutes), so adding an extra day every four years was too much. The solution was to skip some Leap Years. Basically, every year divisible by 4 is a Leap Year. However, years divisible by 100 aren't, but years divisible by 400 are. So, 1800 wasn't a Leap Year, nor was 1900, but 2000 was.

Moving from the Julian Calendar to the Gregorian Calendar meant skipping days to get back some of the days that had been lost by having too many Leap Years. Spain, Portugal and Italy adopted the calendar from Friday 15th October 1582. The previous day was Thursday 4th October 1582, so they skipped forward 10 days. By the time Britain adopted the Calendar in 1752, it had to skip 11 days. It adopted the calendar on Thursday 14th September 1752 - the day before it was Wednesday 2nd September 1752.

Although the Chinese have a calendar, they use the Gregorian Calendar in everyday life like most of the rest of the world. The Chinese Calendar is used for defining the occurrences of festivals and when to carry out certain agricultural duties. This is due to the Chinese Calendar being closely related to astrology and the positions of the moon, Sun and stars, which historically dictated when certain celebrations and events should occur.

In ancient times, a month was calculated roughly by the length of time it takes the Moon to orbit Earth and begin a new phase. This occurs about every 29 and a half days. Although the length of a month now varies, the word month comes from the word "moon" (a "moonth")

The word calendar comes from the Latin word Kalendae which meant the first day of the month.

Although September, October, November and December are the 9th, 10th, 11th and 12th months of the year, the name September comes from the word "septem" which means 7, October comes from "octo" meaning 8, November from "novem" meaning 9 and December from "decem" meaning 10. This is because in the ancient Roman calendar, there were 10 months in the year, so the names of the months reflected when they occurred in the year,.

There was a 30th February 1712! Sweden made a bit of a mess of their introduction of the current Gregorian Calendar, deciding to introduce it gradually by catching up on the lost days by missing out all Leap Years between 1700 and 1740. It would mean that by 1740, their year would be fully Gregorian-calendar compliant, but it meant that in the years between them their calendar would simply not match with any calendar anywhere else. Although they skipped the Leap Year that should have occurred in 1700, they didn't in 1704 and 1708, and in 1712 decided to go back to their old calendar. To do this, they had to add an extra Leap Day to the one already present in 1712. So, for that year only, they had a 30th February. They finally moved over to the new calendar in a more logical way in 1753.