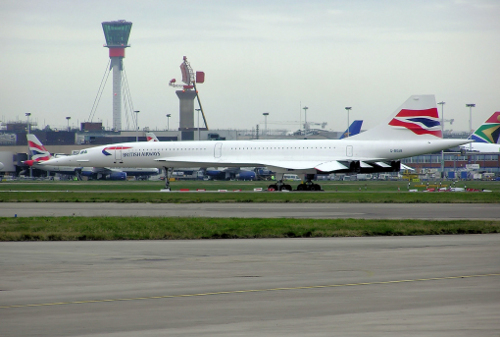 Between 1976 and 2003, it flew the rich and famous around the planet at supersonic speeds. Here are ten facts about Concorde.

Concorde was one of only two commercial supersonic aircrafts to have operated. The other one was the Soviet Union's Tupolev Tu-144 which was much less successful, beginning passenger flights in November 1977, ending them in June 1978.

Concorde was developed and built by British and French engineers. The arrangement was part of an international treaty between the two countries rather than a commercial agreement. This meant that if either country backed out and broke the treaty, it would face heavy penalties. The two companies involved in the development (British Aircraft Corp and France's Aerospatiale) merged into one and worked together to build the planes.

Several of the world's major airline companies placed non-binding orders for Concorde aircraft but most of these backed out of any agreements to go ahead with any of the orders due to several factors (the crash of one of the Soviet Union's supersonic aircraft, worries about environmental and noise pollution and cost of purchasing and operating to craft). The only two airlines that were left were Air France and British Airways, and that was probably largely due to the fact that the two countries built that aircraft. In total, 20 Concordes were built and 14 flew commercially, 7 for France and 7 for Britain.

As Concorde travelled at more than twice the speed of sound (mach 2.0 or about 1520 mph), it created a sonic boom, which could sound like a loud bang, crack or deep rumble. This loud noise and the complaints that inevitably came with it resulted in Concorde being unable to fly certain routes, or having to fly sub-sonically (at the speed of normal airliners) to complete certain journeys. It is one of the main reasons why airlines backed out of purchasing Concordes or developing their own supersonic aircrafts.

The name Concorde was chosen as, in both French and English (as "Concord"), the word means agreement. The plane was to be called Concorde in both France and Britain. However British Prime Minister Harold Macmillan, decided to remove the "e" from the end, as he was annoyed that his French counterpart, Charles de Gaulle, cancelled a meeting with him due to having a cold. The British government's Minister for Technology, Tony Benn, later replaced it, claiming that the "e" stood for Excellence, England, Europe and the Entente Cordial.

Concorde 001 (built in France) made its first test flight on March 2nd 1969. Concorde 002 (built in the UK) first flew on April 9th 1969. The first commercial flights of Concorde took place on January 21st 1976. British Airways flew their Concorde from Heathrow Airport to Bahrain, and Air France flew from Paris to Rio. British Airways Concorde flights from London to New York and back used the flight numbers BA001 to BA004. Since the retirement of Concorde, these flight numbers are no longer used.

For its first few years, Concorde operated at a loss. The British Government, which financed the British side of the Concorde project, took 80% of Concorde's revenue. It was discovered in the early eighties that public perception of Concorde was that it cost more to fly on it than it actually did. So the prices were put up to what people thought they were, and with oil prices reducing, Concorde began making money. In 1984, financial ownership of the crafts were passed over for the government to British Airways who operated the crafts at a profit. It is believed that part of the reason for the crafts being retired in 2003 was that, while they were grounded, British Airways and Air France realised that they made more profit out of the passengers who would have flown on Concorde by them flying First Class on their standard aircrafts.

As well as flying faster than other aeroplanes, Concorde also flew higher, flying at an altitude of about 50,000 to 55,500 feet (although it could fly up to 60,000 feet). At this height, it was possible to see the curvature of the Earth as if you were on the edge of space. Air turbulance is also less of a problem at that height, meaning a less bumpy flight.

Concorde recorded its fastest journey from New York to London on January 1st 1983, taking 2 hours 56 minutes. The was no in flight entertainment on Concorde flights, but you got free champagne and posh food on Wedgwood crockery.

Up to 2000, Concorde was the world's safest aircraft with no crashes and no fatalities. One of the Concordes belonging to Air France crashed on July 25th 2000 after debris from a punctured tyre ruptured the fuel tank. It is believed that the debris had fallen off another aircraft operated by Continental. Concorde lost its Certificate of Airworthiness on July 26th 2000, not regaining it until September 5th 2001 and made its first operational flight with passengers (non-paying airline staff) on September 11th 2001. It returned to commercial operations on November 7th 2001 but ended these in 2003 with Air France flying its final Concorde flight on May 31st 2003 and British Airways on October 24th 2003. An offer by Richard Branson to purchase the remaining Concorde fleet and fly them for Virgin Atlantic was rejected. Concorde will never fly again.