Would you cheat on a television game show to win money and prizes in front of millions of people? Most people wouldn't dare, but some people have tried. But, as we see in this set of facts, it's sometimes the game shows themselves to try to scam their contestants or mislead their viewers. Sneaky!

American television game shows in the mid to late 1950s were often choreographed. Contestants were told what to say to the host, how to behave, what questions to answer and what to miss. Some contestants that the producers and sponsors of the show wanted to win were deliberately given questions that were related to their interests. At the same time, contestants that the sponsors didn't want to win (quite often if they were unpopular with the viewers) were asked harder questions or instructed to give the wrong answer to questions. Other contestants were simply given the questions and answers in advance and some were coached by the producers on how to win the show. 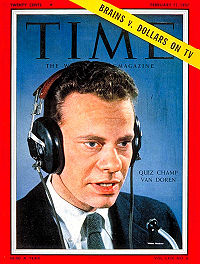 NBC's show Twenty One featured two contestants competing against each other to be the first to reach twenty one points, or become the closest to that total. The winner stayed on to the following week, unless there was a tie meaning that both contestants would play again the following week. For several weekly episodes in 1956, the reigning champion was Herbert Stempel. Producers wanted to get rid of him as he wasn't popular with the audience, so introduced Professor Charles Van Doren (pictured right) on November 28th 1956 to compete. After four weeks of episodes ending in ties, Stempel was instructed to give the wrong answer to a question that he knew the answer to. This meant that Van Doren was able give the correct answer to his question and go on to win (and to remain as champion up to March 1957). After Stempel's allegations of cheating and after it was found that other quiz shows had been rigged, Twenty One was pulled off the air in October 1958 and, when under oath on November 2nd 1959, Van Doren had to admit that he had been provided with the questions and answers to Twenty One in advance.

A British version of Twenty One was produced by Granada TV and broadcast on ITV in 1958 (and was actually the 6th most viewed show in Britain of that year!), but in the wake of the scandal in America, it too was cancelled. Although British television shows didn't come under the same sponsorship pressures as their American counterparts, it was still alleged that the British version of Twenty One was rigged after contestant Stanley Armstrong claimed he had been given "definite leads" to answers. Even with these  leads, he still only managed to win £30! Although the rigging was never proved, the scandal led to a reduction in the amount of prize money that could be given away on British quiz shows, a limit that was finally lifted in 1994.

Marie Winn was a contestant on the CBS show, Dotto, the top daytime quiz show of 1958. Another contestant, Ed Hilgemeier, found a notepad belonging to Winn which contained questions and answers to be used on her appearances on the show. After making this discovery, Winn, Hilgemeier and Winn's opponent Yaffe Kimball-Slatin were offered money to keep quiet, but after Hilgemeier apparently demanded more money in return for his silence (allegedly after finding out that Yaffe Kimball-Slatin had been given more), producers had to own up and reveal that the show was rigged. The show was pulled from CBS (and also from NBC where a nighttime version of the show had started running). The discovery of show-rigging on Dotto is what led to Twenty One being investigated for similar activities.

CBS's The $64,000 Question was another game show that featured contestant manipulation. Rather than contestants being given answers in advance as with Twenty One and Dotto, the questions they were asked were deliberately chosen to help or hinder them depending on whether or not the show's sponsors (in this case Revlon) liked them. In one case, a contestant managed to cheat the cheaters! Joyce Brothers appeared on the show in 1955 as an "expert" on boxing, a subject suggested by the show's sponsors as they didn't particularly want her to win and didn't think she would get very far with this subject. However, Brothers spent the weeks in between finding out her subject and appearing on the show swotting up on boxing, reading everything she could about the sport. She went on the win the jackpot, and then to rub salt into the sponsor's wounds, won the jackpot of the show's sister show, The $64,000 Challenge - the only person ever to do so.

Three years after winning $32,000 on The $64,000 Challenge in 1958, actress Anna Marie "Patty" Duke testified that she had been coached by the show's producers to achieve this win.

Charles Ingram, a contestant on the British version of Who Wants To Be A Millionaire?, cheated his way to £1 million. On September 9th and 10th 2001, Ingram was in the hot seat facing host Chris Tarrant for a recording of the show to be broadcast on ITV1 the following week. Ingram struggled on the first night of filming, having to use two lifelines to get up to £4,000. For the second night's filming, Ingram and his wife conspired with another contestant to defraud the show out of the jackpot. Sitting on one of the "Fastest Finger First" chairs as a standby contestant was Tecwan Whittock. After being asked a question, Ingram would read out the answers while pondering over which answer to give. After Ingram had said the correct answer, Whittock would cough. To verify the answer, Ingram would read the choice of answers out again, and listen for the cough after the right answer. Ingram would then choose that answer as his final answer. On one question, his wife, sitting in the audience, coughed after the correct answer instead of Whittock, who didn't know the answer to the question. Ingram's bizarre performance raised the suspicions of studio staff and other contestants during production. Studio staff were surprised by the way he plumped for answers that he had previously dismissed for no particular reason, and he was surprisingly calm when answering the £1 million question. Other contestants waiting on the "Fastest Finger First" chairs noticed Tecwan Whittock's coughs after Ingram saying certain answers, a cough which he blamed on hay fever and asthma but which he suddenly lost when he was in the hot seat. An alleged argument between Ingram and his wife after the win raised further suspicions. Ingram was contacted within a week of filming to be advised that he wouldn't be able to bank his cheque (that's the reason for them being post-dated!) and that he would be reported to the police. The three accomplices were found guilty of deception but avoided prison. Ingram and his wife were each ordered to pay £15,000 and £10,000 costs, while Whittock had to pay £10,000 and £7,500 costs.

Charles Ingram's "win" on Who Wants To Be A Millionaire? is the largest amount ever fraudulently won on a television game show. Ironically, the investigation into the case cost £2 million. When the episode was eventually screened, the first advert in the first commercial break was for a cough syrup! I suppose that's three facts, but, seeing as this website is Ten Facts About... and not Ten-ish Facts About... they can be squeezed into one.

A competition held on children's television programme Blue Peter had a fake winner. In an episode broadcast on November 27th 2006 on BBC1, viewers were invited to phone in to guess the celebrity owner of a pair of shoes (seriously!). Technical difficulties meant that none of the 13,800 callers' details could be accessed. Instead of cancelling the competition, the show's producers persuaded a visitor to the studio to pose as a caller. Presenter Konnie Huq apologised on a show broadcast in March 2007 and the BBC TV were fined £50,000 for the incident. Later in 2007, Blue Peter was once again in trouble for changing the results of an online poll to name one of the Blue Peter cats. Whereas viewers chose the name Cookie, the cat was named Socks (but a new cat called Cookie was later introduced!).

It wasn't just Blue Peter that was involved in dodgy quiz and competition rigging in recent years. Operators of phone-in competitions held on GMTV and Channel 4's Richard and Judy Show admitted that they kept phone lines open for people to enter the competitions even after they had already chosen a winner or contestant. The channel ITV Play was scrapped after allegations that the questions asked on it were impossible to answer and several BBC radio shows made up names of the winners of competitions (in one case because nobody entered it!) or used members of the production crew or their friends as entrants.