Monaco is a tiny but wealthy country with a world famous casino and race track. Here are ten facts about Monaco.

The Principality of Monaco is the second smallest country in the world. The smallest is Vatican City. Monaco's total area is only 2 square kilometres (1.24 square miles). Monaco is bordered by France on the North, South and West with the Mediterranean Sea to its East.

Monaco is a constitutional monarchy/principality ruled by a descendant of Grimaldi family, and the oldest ruling house in Europe. Up to 2002, it was understood that if their were no heirs of the Grimaldi to rule to country, control of the country would be taken up by France. A treaty between France and Monaco in 2002 meant that should the Grimaldi family leave no heirs, Monaco would still retain its status as an independent nation.

The Monaco Grand Prix is one of the most famous races in the world. Drivers take to the streets of Monaco, tackling its tight corners, narrow streets and famous tunnel. Ayrton Senna holds the record for the most wins on the track, coming first 6 times. The constructor with the most wins is McLaren.

Monaco gained its independence from the Republic of Genoa on 8th January 1297.

People native to Monaco are called Monegasque. A person born in a foreign country but resident in Monaco is a Monacoian. Monaco is unusual because the native Monegasques people are actually in the minority in the country, making up less than a fifth of Monaco's population. The population is made up mostly of wealthy foreigners.

Monaco is famous for its casino in Monte Carlo. However, residents of Monaco are not allowed to gamble or even enter the casino! James Bond is a particular fan of the casino, having visited it in Never Say Never Again (1983) and GoldenEye (1995).

On the birth of Prince Rainier and Princess Grace's first child, a national holiday was declared, the people of the principality were treated to free champagne and gambling stopped for a day in the casino. Their second child, Albert II, is now ruler of Monaco.

Monaco's biggest football team is AS Monaco which plays in the top league of French football, Ligue 1. They last won the league title in the 2016-17 season. Over half of the country's population is able to fit into the team's stadium, Stade Louis II. 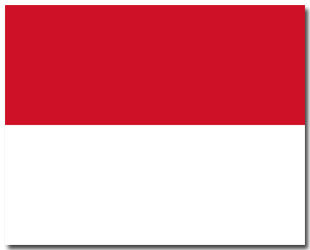