Avast me hearties! Pirates - they were the scourge of the seven seas, the bane of the briny, the terrors of the tides. And here are ten facts about them. Arrrrrr!!! Shiver me timbers! 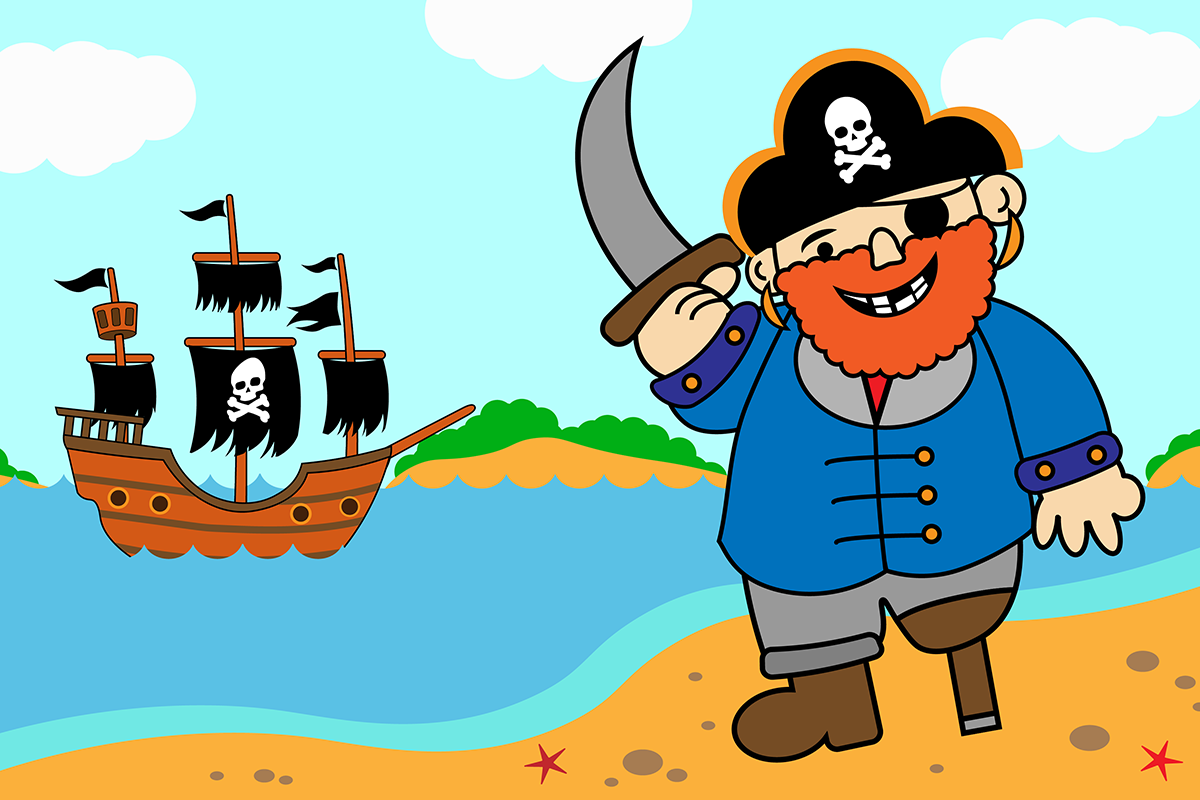 A pirate is a person who commits a crime while at sea. The crimes could be anything but usually involve robbery or violence. Arr!!

2
Pirates of not just the Caribbean

Although people generally associate traditional pirates as those that caused trouble and mayhem in and around the Caribbean in the 17th and 18th Centuries, drinking grog and rum and speaking with some kind of West Country English accent, pirates have existed and still exist wherever there is water. For example, the Vikings could also be classed as pirates as they committed crimes at sea. More recently, pirates have been active around places like the coast of Somalia. The 2013 movie Captain Phillips, starring Tom Hanks, portrays the 2009 hijacking of the Maersk Alabama container ship by Somalian pirates.

3
Blackbeard was a feared pirate with a long black beard.

One of the most famous pirates is Blackbeard. His real name is Edward Teach, and he went around frightening people into giving him money and suchlike. Despite having a reputation of being a bit of a troublemaker, there is no record of him actually murdering any of his prisoners. However, he apparently walked around with lit fuses on his hat. He was killed in a battle in 1718 when a crew led by lieutenant Robert Maynard launched a surprise attack on Blackbeard's ship, a Sloop called Adventure. Blackbeard's head was hung on Maynard's ship as proof of the pirate's death.

Another famous pirate is William Kidd, also known as Captain Kidd. Although there is doubt about whether he was a proper pirate, he was still hanged in 1701 for getting up to piratey antics. After his execution, his body was displayed in chains, in a instrument known as a gibbet, hanging above the River Thames for three years as a deterrent to other would-be pirates. Nice. Captain Kidd is said to have buried some of his treasure. Although we often associate pirates with buried treasure, Kidd is the only pirate known to have done so.

A favourite tipple of pirates was rum. Rum comes from sugarcane which is plentiful in the Caribbean, so meant that it was easy to come by for pirates in that area. Grog, another drink associated with pirates, is tradionally rum, brandy or beer added to water. The addition of alcohol, sometimes along with lemon or lime, was intended to make water, which would become stagnant after several days at sea, easier to drink. In fact, up to the 1970s, sailors in the Royal Navy were still provided with a daily ration of rum and water.

The Jolly Roger, a flag featuring a skull and crossbones, or variations on the same theme (skeletons, death, and other fearsome imagery) is often associated with pirates. They were basically designed to frighten potential victims to surrendering their loot without having to put up a fight.

7
Walking the Plank and other Pirate Punishments

Pirates were known for carrying out cruel punishments on their captives. One of the most infamous methods involved prisoners being made to walk the plank, usually blindfolded and weighed down with cannonballs, with the added annoyance of pirates prodding them with their daggers. However, there are very few known occurences of pirates actually choosing this method of punishment. Sometimes they preferred to simply throw their victims overboard, but if they were feeling particularly cruel, they may maroon their prisoner by abandoning them on an unhabitated island, flog them with a cat o' nine tails (a rope with 9 strands with a variety of items at the ends of them) or throw them into the sea while tied to a rope, to be dragged underneath the ship and suffer extreme pain and possible drowning.

A lot of what we think we know about pirates comes from fictional stories written about them. Perhaps the most famous is Robert Louis Stevenson's Treasure Island (1883), which tells the story of how an expedition to find buried treasure doesn't go quite to plan when it turns out much of the ship's crew are pirates. J.M. Barrie introduced Peter Pan in the early 1900s, and the character appeared in a play and a novel in which he takes on the pirate Captain James Hook. Hundreds of movies about pirates have been made. Most successful are the Pirates of the Caribbean movies with Dead Man's Chest being the highest grossing film of 2006 and At World's End being the highest grossing in 2007. And if you want to be a virtual pirate, they've featured in games such as Sid Meier's Pirates! (1987 and 2004), Captain Silver (1987), The Secret of Monkey Island (1990) and its sequels, and more recently, Assassin's Creed IV: Black Flag (2013) and Sea of Thieves (2018)

Every year on 19th September, it is International Talk Like A Pirate Day, when it becomes perfectly acceptable to spend the day talking like a pirate. If you want to do it all year round and you're on Facebook, you can change the language to Pirate in the account settings.

Pirates wore earrings because they thought that they improved their eyesight - not as fashion accessories. Others thought they'd help to prevent seasickness. Garr!!!