Henry VIII is one of England's most notorious rulers. Born on 28th June 1491, he ruled the country until his death at the age of 55 on 28th January 1547. Famous for multiple marriages, having people beheaded, and forming the Church of England, Henry most definitely left a legacy. Here are ten facts about King Henry VIII.

Henry became King of England on 21st April 1509 after the death of his father, Henry VII. Henry VIII was 17 years old at the time, and his coronation was on 24th June 1509.

Henry VIII nearly didn't become King. Henry VII's eldest son was Arthur, and therefore heir to the throne. Arthur died at the age of 15 in 1502, meaning that his younger brother, Henry, would take his place as future King.

CATHERINE OF ARAGON (1485 - 1536)
Catherine of Aragon was originally the wife of Prince Arthur, Henry's older brother, and the daughter of Queen Isabella I of Castile and King Ferdinand II of Aragon (Castile and Aragon were Kingdoms in Spain). Arthur married Catherine in 1502 but died twenty weeks later. It was arranged that Catherine would then marry Henry. This was because King Henry VII was keen for there to be a union between England and Spain. Prince Henry initially rejected the marriage but changed his mind after the death of his father. Catherine gave birth to a daughter, Mary. King Henry VIII had his marriage to Catherine of Aragon annulled in 1533.

ANNE BOLEYN (1507 - 1536)
Anne Boleyn was the sister of one of Henry VIII's mistresses, Mary Boleyn. Henry was desperate for a son, but Anne Boleyn bore him a daughter, Elizabeth, who would later become Queen Elizabeth I. Henry VIII wanted to end his marriage to Anne, so had her tried for adultery and treason and even witchcraft. She was beheaded in 1536.

JANE SEYMOUR (About 1508 - 1537)
Jane Seymour gave birth to a son, Edward. By annulling his previous two marriages, Henry VIII's daughters from them were declared illegitimate and therefore not entitled to take the throne. This meant that Edward could, and did, becoming King Edward VI. Jane Seymour died 12 days after giving birth in 1537.

ANNE OF CLEVES (1515 - 1557)
Anne of Cleves married Henry VIII only five days after they met in January 1540, with their marriage only lasting six months. Anne agreed to an annulment after confiming that their marriage was never consummated and that she had kept quiet about an earlier contract of marriage.

CATHERINE HOWARD (About 1523 - 1542)
Catherine Howard married Henry VIII only a couple of weeks after his marriage to Anne of Cleves was annulled. Catherine Howard was a cousin of Henry's second wife Anne Boleyn, and like Anne, suffered the same fate. She had allegedly been in an adulterous relationship with Thomas Culpeper, one of Henry VIII's courtiers. Catherine was beheaded in 1542.

CATHERINE PARR (1512 - 1548)
Catherine Parr was Henry VIII's sixth wife and outlived him. She played an important role in restoring Mary and Elizabeth, Henry VIII's daughters from his first and second marriages, to the line of succession, although Edward remained first in line to the throne.

Henry VIII oversaw the official unification of England and Wales, Wales becoming part of the Kingdom of England, with the two countries sharing the same laws and powers. This was formalised in the Laws of Wales Acts 1535 and 1542.

Henry VIII is the only English monarch to have ruled any part of Belgium. He captured the town of Tournai in 1513 which at the time was part of France. He returned it to France in 1518. 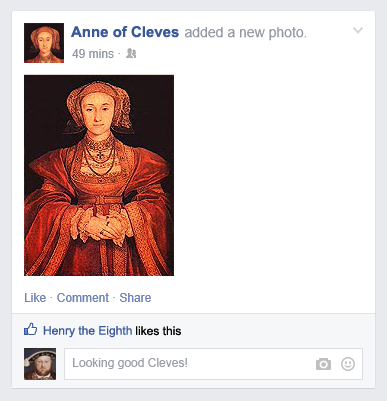 In order to choose his fourth wife, Henry VIII was sent paintings of potential partners. It's a bit like medieval online dating. He viewed portraits of Anne of Cleves and her sister Amalia of Cleves. It appears he preferred Anne to Amalia, and agreed to marry her. It seems that he was disappointed with what he ended up with, calling her a "fat, Flanders mare". After getting the marriage annulled after just six months, Henry VIII had his chief minister, Thomas Cromwell, beheaded. It was Cromwell who had set Henry up with Anne. Serves him right for trying to play cupid.

Anyone for tennis? Henry VIII certainly was. He enjoyed playing a version of the game called real tennis. Although modern tennis developed from this game, real tennis has a different court layout and different rules. Even so, real tennis is still played to this day, even at Hampton Court Palace where Henry VIII used to play. Want to play it yourself? Here are the rules: http://curtc.net/thegame/index.php

Henry VIII had four children. Mary, Elizabeth and Edward were his children from his first three marriages. But he had a son with his mistress, Elizabeth Blount, a maid of honour to his first wife, Catherine of Aragon. He was born in 1519 and named Henry Fitzroy. The surname Fitzroy means "son of a King" and was a way of Henry VIII acknowledging that Henry Fitzroy was his son. So it seems that if you were a woman and allegedly committed adultory, you had your head chopped off. But if you happened to be the King, it was ok.

Henry VIII is famous for being rather large. But it was only in later life that he gained weight. Through most of his life, he was in good shape. A suit of armour that he wore towards the end of his reign reveals that he had a whopping 52 inch waste. It is thought that he weighed about 28 stone (392 pound or 178 kilograms). He still lived to the ripe old of 55, 10 years more than the average life expectancy at the time.